A software model to test your design approach

Keeping your costs to a minimum

To reduce the cost of simulating antennas, we have developed a standard model for an inverted F antenna and an L antenna on a PCB based on our consultancy work for NeoCortec.

NeocCortec is a manufacturer of a unique Meshnet protocol stack with a battery-powered router and gateway. NeoCortec‘s stack operates at 2400 MHz and 868/915 MHz and complies with the European Duty Cycle.

NeoCortec’s customers had sometimes complained about a lack of range for their products and in order to understand the reasons why the company placed an order with the akorIoT group for a study of their customers’ self-built PCB antennas. It turns out that the reason for this lack of range is often due to faulty antenna design rather than an issue with the NeoCortec components.

To minimise support costs incurred by NeoCortec in helping their customers, the design of an L and F antenna is explained in detail in the study. It is demonstrates how various design changes effect final system performance and when followed will allow NeoCortec’s customers a better chance of getting the results they seek. 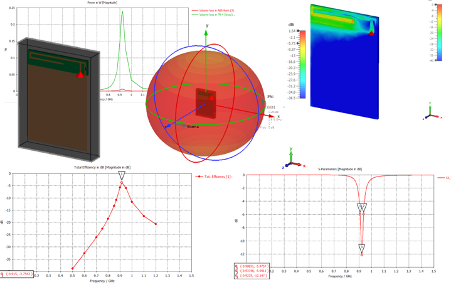 The hundreds of antenna simulations we conducted were extracted and summarised on a report spanning over 50 pages. At the end of the report is a software model with a rectangular PCB with antenna, battery and housing in the size and shape of a US quarter. The dimensions of the PCB, the free space for the antenna, the distance of the PCB to the enclosure wall and antenna to the enclosure, the material of the enclosure / PCB and the size/position of the battery in the enclosure can be all adjusted with a few mouse clicks.

This model is now available to akorIoT customers to perform antenna simulations for various bands including. 433, 868, 915 or 2400 MHz for a flat rate of Euro 480.

Broad support to all IoT designs

The most difficult band to optimise is 868 MHz in Europe and 915 MHz in the USA. This is because the lower the frequency, the more complex the antenna design becomes.  Because LoRaWAN, Sigfox, Mioty, Z-Wave and other technologies operate in this band IoT developers of these technologies can also use the model to aid their designs.  This is further extended to NB-IoT because it is found above or below 868 MHz band in Europe.

To extend the model’s use further the single F antenna was converted to a dual F antenna, at the end in order to cover LTE-M at 1800 MHz

Trust the experts.  How akorIoT can help

The team offer a range of services to help you get the best possible performance from an antenna, contact us today find out how we can help.